Are you tired of the annoying pop-up ads that randomly appear on your screen and you don't know which app has shown them ?

Download APK
0/5 No votes
Report
Developer
Youssef Ouadban TechVersion
1.5.3
Updated
June 21, 2020Requirements
6.0 and up
Get it on

Are you tired of the annoying pop-up ads that randomly appear on your screen and you don’t know which app has shown them ?

AppWatch will help you find the app that is showing the popup ads on your phone.
How ?
1 – Turn on the switch “Start monitoring”
2 – Exit the app and start using your phone normally
3 – When a pop-up ad randomly appears on your screen; Open AppWatch, and you will find in the activity history, the latest launched app, which should normally be the app that showed the annoying ads.
4 – Finally you may want to uninstall the culprit app and search for an alternative..

Why does AppWatch contain ads ?
It is fair that the developer receives compensation for his work from clean and acceptable advertising.
AppWatch fights only against the annoying and intrusive popup ads. 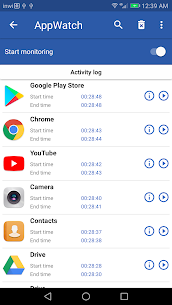 PandaVPN Free -To be the best and fastest free VPN PandaVPN Studio October 16, 2020